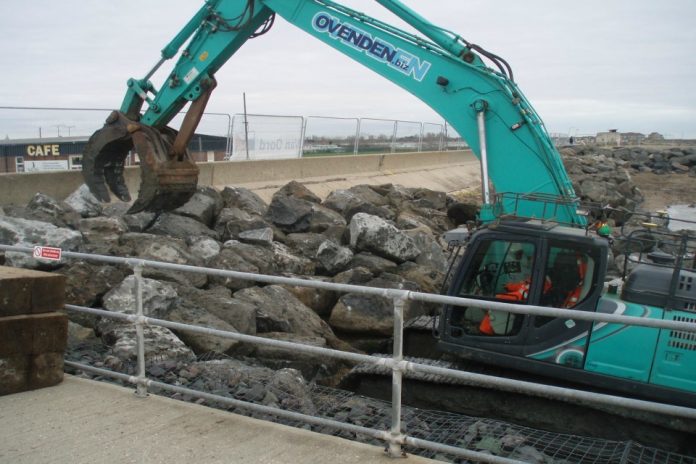 The Environment Agency has started work on erosion protection to Seawick sea defences, which will help protect homes, businesses, caravans and holiday chalets from flooding.

The work now underway will reduce the risk of erosion to the existing sea defences by placing rock armour around the sea wall at Hutley’s Gap and along a 250m section in front of the Bel Air Chalet Estate.

By improving the defences, the low lying area behind the seawall will be better protected from sea flooding and the severe impact that it can have on people, properties and the local economy, which relies heavily on tourism.

The Seawick sea defences project will benefit the local area into the future by better protecting the current seawall from erosion and enhancing biodiversity in the process.

In carrying out this work now we are extending the life of the existing seawall in the most cost effective way. Without this project, larger more expensive works would be required in the near future.

The project has an ambitious timeline and we would like to thank Tendring District Council for allowing us to meet this by permitting the work to take place from early mornings to late evenings, and the local community for their understanding whilst the work takes place.

How the work will progress

During the first weeks, rock will be delivered by road and kept in a temporary storage area on the upper section of beach.

Construction will be focused around low tides between the hours of 5:00am and 9:00pm. Dump trucks will distribute the rocks to where they are needed. Large excavators will then place them to form the rock armour.

The work will be carried out by Environment Agency contractor Van Oord, which is expected to complete the work by the end of the year, subject to weather conditions.