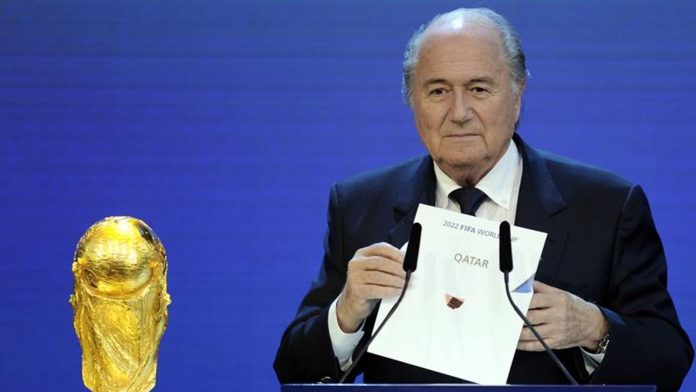 A senior MP has called for a “proper independent investigation” into the latest allegations surrounding Qatar’s bid for the 2022 World Cup.

Damian Collins, who is chair of the Commons digital, culture, media and sport select committee, told Sky News it would be a “very serious matter” if the country was found to have broken the bidding rules.

It comes after the Sunday Times reported Qatar ran a secret campaign to sabotage their rivals for the right to host the tournament.

According to the newspaper, the bidding team used a PR agency and former CIA operatives to put out fake propaganda about its main competitors, the United States and Australia.

The disinformation campaign allegedly involved recruiting prominent figures to criticise the bids in their own countries, in an effort to give the impression that they lacked support at home.

Qatar’s Supreme Committee for Delivery and Legacy said it “rejected” all of the allegations, while FIFA said there had already been an investigation into Qatar’s bid and no wrongdoing had been found.

Reacting to the Sunday Times report, Mr Collins said: “I think what needs to happen now is for there to be a proper independent investigation of the allegations published in the Sunday Times.

“I’ve met the whistleblower myself and seen the evidence that he’s brought forward.

“I think these are serious matters and there needs to be a proper independent investigation of them.”

Mr Collins added there had been a “big loss of confidence” in FIFA as a result of corruption allegations, and said the latest claims represent an “opportunity to demonstrate that FIFA takes these issues much more seriously than it has done”.

According to FIFA’s rules, bidders must “refrain from making any written or oral statements of any kind, whether adverse or otherwise, about the bids or candidatures of any other member association which has expressed an interest in hosting and staging the competitions”.

The alleged smear campaign reportedly included paying a professor $9,000 (£6,900) to write a highly-critical report on the economic cost of hosting a tournament in the US, recruiting journalists and bloggers to promote negative stories in the media and organising grassroots protests at Australian rugby matches.

It is also claimed that a group of American PE teachers were recruited to ask congressmen to oppose a US World Cup because the money would be better spent on school sports.

The allegations come in the wake of Prime Minister Theresa May holding talks with the Emir of Qatar, Tamim bin Hamad, at Downing Street earlier this week.

According to Number 10, “they discussed how the UK could continue to support Qatar to deliver a safe and successful World Cup 2022, with the Prime Minister highlighting our particular expertise in this area”.

The Qatar bid team has been accused of corruption before, but was cleared after a two-year investigation by FIFA’s ethics committee.

“We have been thoroughly investigated and have been forthcoming with all information related to our bid, including the official investigation led by US attorney Michael Garcia.

“We have strictly adhered to all FIFA’s rules and regulations for the 2018/2022 World Cup bidding process.”

A FIFA spokesperson said: “Concerning the 2018 and 2022 FIFA World Cup bidding process, a thorough investigation was conducted by Michael Garcia and his conclusions are available in the report, which has been published on FIFA.com.”

“Generally speaking, complaints regarding potential breaches of the FIFA Code of Ethics may be filed via FIFA’s confidential reporting mechanism.”