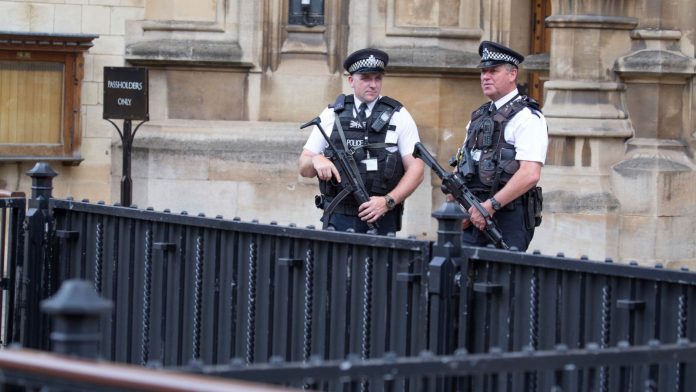 Theresa May has condemned terrorists who have attacked Westminster as “twisted” – as the government revealed a rise in thwarted plots and live terror investigations.

Three people were mowed down by a driver, aged 29, outside the Houses of Parliament on Tuesday morning.

With the PM “away on a break” in Switzerland, Downing Street revealed that Home Secretary Sajid Javid was returning home immediately after flying to his holiday destination on Tuesday morning “so he can take a briefing in person on events”.

The prime minister, whose own holiday plans are being kept under review, said that despite the latest attack the terrorism threat would not be raised from severe.

She urged the public to remain vigilant but to carry on as normal.

But Downing Street revealed the number of Islamist terror plots thwarted by police and security chiefs since March 2017 had increased from 12 to 13, with four far-right plots also stopped in the same period.

And the number of “live investigations”, which in March this year was said by the government to be “over 500”, increased sharply to 676 by the end of June, the PM’s spokesman said.

In a hard-hitting statement after the COBRA meeting, the prime minister said: “Today’s suspected attack outside of the Houses of Parliament is shocking.

“For the second time in as many years the home of our democracy, which is a potent symbol of our precious values of tolerance and freedom, has witnessed terrible scenes just yards from its door.

“My thoughts are with the innocent members of the public who were hurt in this appalling incident.

“I wish them a speedy recovery and we must be thankful that nobody suffered life-threatening injuries.

“I also wish to praise the formidable courage of our emergency services, who were on the scene immediately and in significant numbers.

“Once again, they did not flinch and ran towards a dangerous situation in order to protect the public.

“The country is hugely grateful for their calmness and professionalism.

“The threat to the United Kingdom from terrorism remains severe. I would urge the public to remain vigilant – but also to come together and carry on as normal, just as they did after the sickening attacks in Manchester and London last year.

“The twisted aim of the extremists is to use violence and terror to divide us. They will never succeed.”

In the absence of any senior ministers, Number 10 said the COBRA meeting was chaired by the government’s deputy national security adviser, Madeleine Alessandri, and attended by officials.

The prime minister’s spokesman said Chancellor Philip Hammond was the “ranking minister” in London at the moment but Mrs May was being kept informed while she is away in Switzerland.