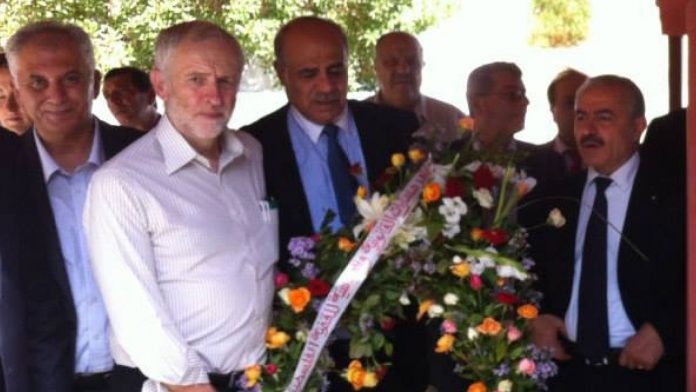 Jeremy Corbyn has been reported to Parliament’s sleaze watchdog, accused of failing to declare his controversial wreath-laying trip to Tunisia or reveal who paid for it.

Tory MP Andrew Bridgen has written to the Parliamentary Commissioner for Standards, Kathryn Stone, alleging “a serious breach” of Commons rules and demanding an investigation.

In his letter, seen by Sky News, Mr Bridgen says the Labour leader’s office has “declined to declare” who funded the trip, adding that the visit also “raises the question of whether Mr Corbyn breached the code of conduct by not referring to his entry in the register in debates mentioning Israel, Palestine or Tunisia”.

Mr Bridgen claims that Mr Corbyn’s attendance at the ceremony and “subsequently not declaring it” has caused “significant damage to the reputation of the House of Commons and its members”.

Mr Corbyn’s 2014 trip has triggered a huge row because of claims that he laid a wreath to commemorate Palestinians linked to the 1972 Olympic Games massacre in Munich, which he denies.

He insists he was there to honour Palestinians killed in an Israeli air attack on the Tunis headquarters of the Palestine Liberation Organisation in 1985.

If the Standards Commissioner rules that he broke Commons rules on declaring an overseas trip, he will have to make an apology to MPs. In theory, he could be suspended from the House.

Earlier, Mr Corbyn insisted he would not apologise for attending the ceremony

Quizzed multiple times on whether he took part in laying a separate wreath to suspected terrorists at the Palestinian Martyrs Cemetery, Mr Corbyn revealed: “I was there when the wreaths were laid – that’s pretty obvious.

“There were many others there who were witness to that. I witnessed many other people laying many wreaths.”

He added: “I laid one wreath along with many other people, in memory, as I’ve said, of all those who died in the awful attack in 1985, which as I keep repeating, you seem not to understand, was condemned by the whole world.”

Mr Corbyn also branded the attack in Munich as “appalling” and “totally wrong by any stretch of the imagination”.