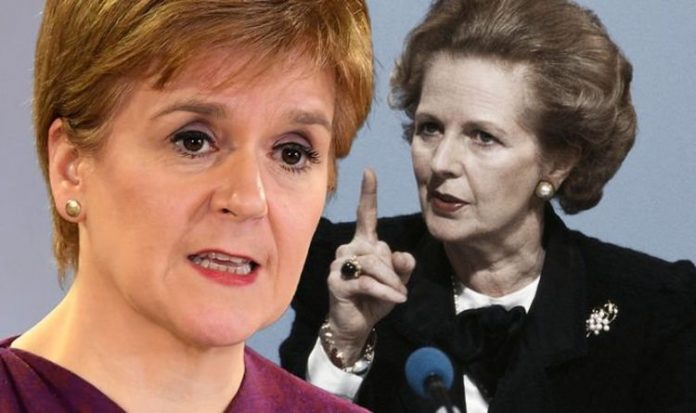 Scottish First Minister Nicola Sturgeon took charge of the SNP – and with it an absolute majority at Holyrood – in the aftermath of the 2014 Scottish independence referendum. The SNP lost that referendum, but left-leaning Scots, many of them former Labour voters, flocked to her side. She won the subsequent general elections on the basis of what is considered, by modern British standards, a radical pitch: higher taxes on the rich, an end to austerity, and the abolition of Trident, the UK’s Clyde-based nuclear deterrent.

Throughout her premiership, Ms Sturgeon has tried to cast herself as a defender of those policies.

In 2018, the First Minister used her keynote address in Aberdeen to describe the SNP as a bastion of a social democracy model that is under attack across the globe.

She said: “We are governing in tough times.

“The legacy of the recession and the continued reality of Westminster austerity challenges us every single day.

“In countries across the world, social democracy appears to be in retreat – and many long established political norms are in a state of flux.

“At times like these, and for parties like ours, two things are more important than ever. To focus on what makes a difference – not just now, but in the long term. And to stand up for what we believe in.”

If Ms Sturgeon achieves her dream and Scotland becomes independent, though, she might have to say goodbye to her socialist economic model and welcome more Thatcherite policies – particularly if she wants the country to join the EU.

In a 2017 report, Marian L. Tupy, a senior policy analyst at the CATO Institute’s Centre for Global Liberty and Prosperity, made the example of the “velvet divorce”, which saw Slovakia having to abandon socialism after its Czech split.

Like many Scottish nationalists, advocates of Slovak independence wanted to break away from their larger, richer, partner, in part so they could pursue more interventionist economic policies.

However, with the loss of Czech subsidies, independent Slovakia ended up having to pursue much more free market-oriented policies than before, bringing an end to socialism in the country.

Mr Tupy wrote: “The early years of Slovak independence were close to catastrophic. The heavily-regulated economy was artificially stimulated through heavy borrowing.

“Even so, the Treasury ran large deficits and by 1998, the country was within a hair’s breadth of bankruptcy. Moreover, under assault for mismanagement and corruption, the government grew increasingly authoritarian, which resulted in Slovakia’s international isolation.

The parallels with Scotland, Mr Tupy wrote, should be obvious, as while the Scots resent their much bigger neighbour in the south, they are also heavily reliant on English subsidies, which are bound to grow larger as Scottish oil becomes scarcer and falls in price due to the fracking revolution in the US.

He concluded in his piece for CapX: “It is that subsidy that allows Holyrood to maintain a much more socialist economic model than would be the case if Scotland had to fend for itself.

“The English are putting up with Scottish dependence and periodic hissy fits because of a deep emotional commitment to the Union by a succession of British leaders.

“Then, in 1998, Slovaks kicked out the nationalists and elected a reformist government, which proceeded to liberalise the economy, privatise loss-making state-owned enterprises and massively improve the country’s business environment. In 2004, Slovakia entered both NATO and the European Union.”

JUST IN: Orban’s radio ban may spark fresh calls to kick Hungary out of EU

Michal Kováč was the first President of Slovakia (Image: GETTY)

“That is an emotion I fully share, yet I also believe that independence is exactly what Scotland needs in order to rid the birthplace of Adam Smith of socialism once and for all – after a brutal but necessary learning experience, like Slovakia’s.”

In a 2013 report for the Financial Times, Swedish economist Erik Berglöf looked back at how former Prime Minister Margaret Thatcher heavily influenced new democracies in central and eastern Europe such as Slovakia.

He wrote: “Thatcher surely influenced most policymakers in the new democracies in central and eastern Europe.

“Some of them, like Czechoslovakia, followed her advice literally and privatised state-owned companies by giving away shares to the public while others, like Hungary, embraced private ownership but chose to sell controlling stakes to strategic investors.

“Advocated by Thatcher, the path of EU accession was a powerful incentive – including both carrots and sticks – for the reform policies of countries like Hungary and the Czech Republic.

“Perhaps most dramatically we saw this in the case of Slovakia.

“An early laggard in transition, it was the threat of postponement of EU membership that empowered visionary reformers in the country to catch up and in some respects overtake its neighbours.

“Thatcher saw the need to break that mould; she was successful in transforming the state’s role from an economic player to an enabler of the private sector, and for that she deserves much credit.”

According to a report by the CATO Institute, Scotland’s greater statism and suspicion of capitalism are obstacles to reform in England and Wales and a serious danger to economic prosperity north of the border.

The 2014 report reads: “Sooner or later, Scotland will need to introduce reforms that it would never accept from a Westminster government.

“The end of the Union may be a high price to pay for the end of socialism on the British Isles, but the rewards from a more robust, long-term economic growth are not negligible either.”

During the 2014 Scottish independence referendum campaign, the same sentiment was echoed by Wealthy Nation – a collection of business people, academics and others.

They described Britain as a failed state and pushed for Scotland to adopt more of a Thatcher-esque free market approach, with less government interference, less tax and more choice in health and education.

The group believed that, rather than being held back by the brand of socialism offered by the SNP, Scotland should have looked to the example of former Communist bloc countries like Slovakia and Slovenia, whose “approach to de-regulation, de-taxation and de-centralisation led to economic growth not seen in Scotland for 100 years”.

In an exclusive interview with Express.co.uk, constitutional historian Vernon Bogdanor argued the reforms Ms Sturgeon might have to implement to join the EU will make former Chancellor of the Exchequer George Osborne look like Santa Clause.

Mr Osborne was the architect of the controversial austerity drive in Britain after the financial crisis.

“Scotland joining the euro would cause lots of problems because their current budget deficit is around seven percent. And they would have to reduce it to three percent, under current EU rules.

In another interview with Express.co.uk, Economics Professor at Edinburgh Napier University Piotr Jaworski warned many people in Scotland will end up regretting voting for independence.

Ms Sturgeon has in the past been accused of stealing lines from the Iron Lady.

In 2015, the SNP launched a series of new adverts, featuring a picture of Ms Sturgeon alongside the slogan: “Don’t just hope for a better Scotland. Vote for one.”

In the 1979 election campaign, the Conservatives, then led by Mrs Thatcher, put up similar posters with their leader telling voters: “Don’t just hope for a better life. Vote for one.”

Former Scottish Labour deputy leader and campaign director Alex Rowley said at the time: “We knew the SNP under Nicola Sturgeon had ditched the left-wing rhetoric, but we didn’t expect them to start stealing Thatcher’s lines.

“I’m sure Nicola Sturgeon will cringe at the idea of being compared to Margaret Thatcher – someone in SNP HQ will be getting the hairdryer treatment.”

Mr Rowley added: “In May, rather than voting for hundreds of millions of pounds of cuts to schools and services, Scots can vote for a Scottish Labour Government that can stop the cuts.”

Ms Sturgeon dismissed the comparison between her billboard and the Tory one from 37 years ago.

She said: “If Labour are saying that it just shows beyond any doubt how desperate Labour are.

“We’re fighting a positive campaign, full of hope and optimism about the future of Scotland.

“As we go into the final 10 days of this campaign I’m taking nothing for granted.

“But I’m thoroughly enjoying this campaign and I’m looking forward to the remainder of it.”