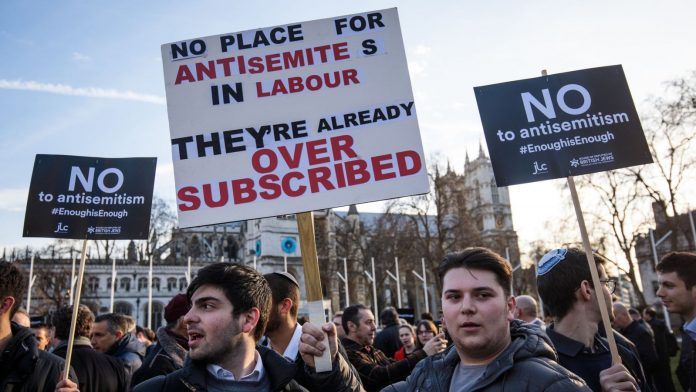 Labour have been dogged all summer by a row over anti-Semitism and how the party judges complaints made against its members.

Most MPs have called on Labour to adopt the definition and examples of anti-Semitism set out by the International Holocaust Remembrance Alliance (IHRA).

“Anti-Semitism is a certain perception of Jews, which may be expressed as hatred toward Jews.

“Rhetorical and physical manifestations of anti-Semitism are directed toward Jewish or non-Jewish individuals and/or their property, toward Jewish community institutions and religious facilities.”

The IHRA also gives 11 examples, saying that manifestations “might include the targeting of the state of Israel, conceived as a Jewish collectivity”.

It adds: “Criticism of Israel similar to that levelled against any other country cannot be regarded as anti-Semitic.”

The seven examples Labour have adopted are:

:: Calling for, aiding, or justifying the killing or harming of Jews in the name of a radical ideology or an extremist view of religion.

:: Making mendacious, dehumanising, demonising or stereotypical allegations about Jews as such or the power of Jews as collective – such as, especially but not exclusively, the myth about a world Jewish conspiracy or of Jews controlling the media, economy, government or other societal institutions.

:: Accusing Jews as a people of being responsible for real or imagined wrongdoing committed by a single Jewish person or group, or even for acts committed by non-Jews.

:: Denying the fact, scope, mechanisms (e.g. gas chambers) or intentionality of the genocide of the Jewish people at the hands of National Socialist Germany and its supporters and accomplices during World War II (the Holocaust).

:: Accusing the Jews as a people, or Israel as a state, of inventing or exaggerating the Holocaust.

:: Using the symbols and images associated with classic anti-Semitism (e.g., claims of Jews killing Jesus or blood libel) to characterise Israel or Israelis.

:: Holding Jews collectively responsible for actions of the state of Israel.

The four examples Labour have not adopted are:

:: Accusing Jewish citizens of being more loyal to Israel, or to the alleged priorities of Jews worldwide, than to the interests of their own nations.

:: Denying the Jewish people their right to self-determination, e.g., by claiming that the existence of a State of Israel is a racist endeavour.

:: Applying double standards by requiring of it a behaviour not expected or demanded of any other democratic nation.

:: Drawing comparisons of contemporary Israeli policy to that of the Nazis.

Labour’s ruling body is meeting on Tuesday to vote on adopting the remaining definitions.

But the National Executive Committee is also expected to include a so-called free speech clause, allowing for criticism of Israel.