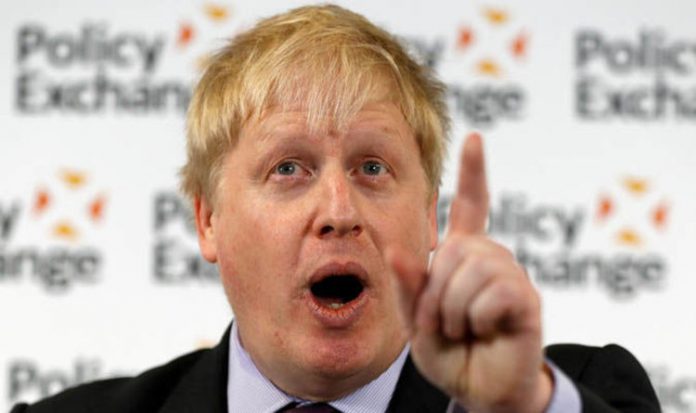 Income tax, stamp duty and capital gains tax should all be reduced without rises in other levies, Mr Johnson said.

His call followed a series of clashes with Mrs May since his resignation from the Cabinet in July in protest at her Brexit plans.

In an article, the Uxbridge and South Ruislip MP wrote: “We should be looking not at rises but at cuts to income tax, capital gains tax and stamp duty. That is the way to get the economy going.”

Mr Johnson also criticised the Prime Minister and her Chancellor Philip Hammond for threatening to increase taxes to fund an extra £20billion spending on the NHS.

“We do need to spend more on the NHS. We must find the extra £20 billion that the Chancellor has rightly promised.

“We do need to step up our investments in the police and schools and other vital public services.

“But I am afraid I am not convinced that the answer is immediately to turn to the hard-pressed taxpayer, when Britain is now by no means a low-tax economy compared with several other jurisdictions in Europe,” former Cabinet minister wrote.

“Contrary to the direful predictions before the EU referendum of 2016, the public finances are improving.

“Now is the time for this Conservative government to show how a post-Brexit Britain will be a happy and dynamic economy that fosters enterprise, that rewards the strivers and the innovators, and where people can hope to take home more of their pay to their families.

“I know it is not fashionable to point this out, but the US currently boasts economic growth rates far in excess of this country, at about 4.5%, and with record low unemployment – and that growth is being driven not just by the US government’s decision to cut taxes and regulation, but perhaps even more by psychology – by the sense that the government wants to cut taxes, wants to liberate and energise people.

“Do we send out that signal, here in this country? I am not so sure.”

He added: “Instead of canvassing tax rises, we should say that tax henceforward will not go up – that’s it, no new taxes and no increase in rates.

“We should be lifting thresholds, so that people on modest incomes are not caught by fiscal drag, like so many in the South East.”

The Prime Minister’s spokesman insisted the Government had a record of tax reductions.

“I can point to this Government’s record of cutting taxes for hard-working households,” the spokesman said.

Income tax thresholds had been raised to deliver a tax cut worth up to £1,000 for a basic-rate taxpayer and business taxes had also been reduced, the spokesman said.

He also rebuked Mr Johnson for writing an article over the weekend which likened the Prime Minister’s Brexit plan to “putting a suicide vest around the British constitution”.

“This is not language the Prime Minister would choose to use.

“Beyond that I don’t propose to give this article any further oxygen,” the spokesman said.

“That is categorically untrue and offensive,” the spokesman said.