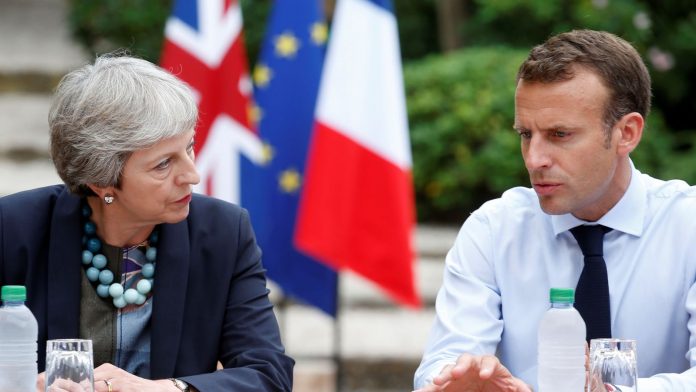 I write from the beach overlooking Le Fort de Bregancon, an impressive castle which has served as a summer retreat for French leaders from Napoleon to Macron.

Why are we here? Because Theresa May asked to be here.

Her office had requested a meeting with the French president to discuss – and perhaps begin to break – the latest Brexit deadlock.

The Chequers proposal, the most detailed British vision for Brexit to date, has been rejected by the EU.

The EU feared that would have weakened an already fragile prime minister.

Instead the EU has gently suggested that it’s not a runner.

The EU’s chief Brexit negotiator Michel Barnier put it in black and white on the eve of the fortress meeting.

He wrote in an opinion piece in a number of European newspapers: “Some UK proposals would undermine our single market which is one of the EU’s biggest achievements.

“The UK wants to keep free movement of goods between us, but not of people and services.”

It followed a number of occasions these past two weeks when he has knocked down a central pillar of the Chequers proposal, which he sees as an attempt by the UK to cut through the “indivisible” four freedoms – the free movement of goods, services, capital and people.

So depending on which way you look at it, Mrs May is either here for this meeting to divide and rule; to go over the head of Mr Barnier and appeal to the EU member countries leaders directly.

Or this is simply one of a number of important opportunities to talk through Chequers in detail, face-to-face, eye-to-eye with a key EU leader.

The UK and France are pivotal players in a very uncertain world at the moment.

With that in mind both leaders will want to find a way through this impasse.

But there is a key question at the heart of the EU side’s thinking on Brexit who, don’t forget, deeply regret Britain’s departure and are aware it presents dangers, whatever happens.

The question is this: what’s the best or the least bad Brexit for the EU’s medium and long term interests?

Is it to give the UK a good deal – thus breaking principles of the EU, allowing Britain free movement of goods but not people; unique bespoke deal, as outlined in Chequers?

This could endanger the integrity of the single market and of the EU project – other countries would wonder if leaving is actually a good idea; they’d want the same deal too.

Or is it to hold the line; play hardball, not offer a good deal, maintain the integrity of the EU and risk the complete collapse of the talks? This would have huge consequences for both sides.

It could rupture relations between the UK and the EU for a generation.