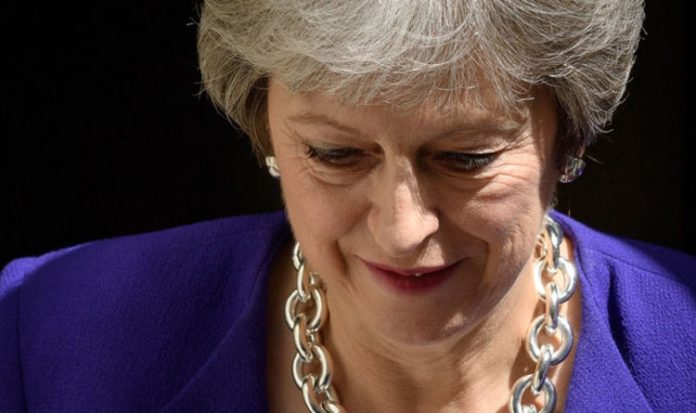 Conservative MP Philip Davies, Tory MP for Shipley in West Yorkshire, has submitted a letter of no confidence in Theresa May’s leadership.

In the letter, submitted to the backbench 1922 Committee, Mr Davies said he has “lost trust” in Mrs May’s ability to deliver Brexit.

He said: “This has not been an easy decision and I have agonised over it, but I know in my heart of hearts it is the right decision.”

For a no confidence vote to be triggered, letters from at least 48 Tory MPs (15 percent) must be sent to chairman of the Committee, Graham Brady.

It is thought that around 40 other MPs have submitted letters so far, but only Mr Brady knows the exact number, as MPs are entitled to anonymity unless they choose to make it public.

The Yorkshire Post reported that Mr Davies said: “Politics is all about trust and once it is lost it is impossible to win back.

“Many people have told me that as a result of this they have lost trust in the Prime Minister to properly and fully deliver the referendum result.

“It is with much sadness that I have to say that have also lost trust in her to deliver the referendum result too.

“Failure to keep our promise to the electorate will almost certainly lead to the catastrophe of Jeremy Corbyn becoming Prime Minister and I cannot sit back and allow that to happen.

“Therefore I have reluctantly come to the conclusion that I have no alternative but to send a letter to the Chairman of the 1922 Committee asking him for a vote of no confidence in the Prime Minister.”

This latest blow comes the day after former Foreign Secretary Boris Johnson’s scathing resignation speech to the House of Commons.

In it, he said a “needless fog of self-doubt” had descended over the past 18 months.

While praising the PM’s “courage and resilience”, he said her plan for Brexit would see the UK in “miserable limbo”.

However, he said it’s “not too late to save Brexit” and urged Mrs May to change tack and negotiate a better deal for the UK.

According to Mr Johnson’s friends, he has insisted he is not trying to emulate Sir Geoffrey Howe, whose vitriolic resignation speech in 1990 is widely thought to have paved the way for Margaret Thatcher’s downfall weeks later.

Despite these latest attacks on her premiership, it seems Mrs May has managed to swing a few MPs back in her favour.

One MP, Simon Clarke of Middlesbrough South and East Cleveland, had submitted a no-confidence letter but withdrew it yesterday.

Mr Clarke said: “I’ve come to the conclusion the prime minister deserves the chance to deliver the deal which we all, in the end, want to see.”

Will Theresa May resign?

However there has been much speculation about the Prime Minister stepping down since last year’s disastrous snap election, and she has weathered the onslaught of storms since.

After the election which saw the Tories lose their overall majority in Parliament, Mrs May said: “At this time, more than anything else this country needs a period of stability.”

It is possible she thinks its wisest to cling to power in an attempt to present a strong ruling party to the public.