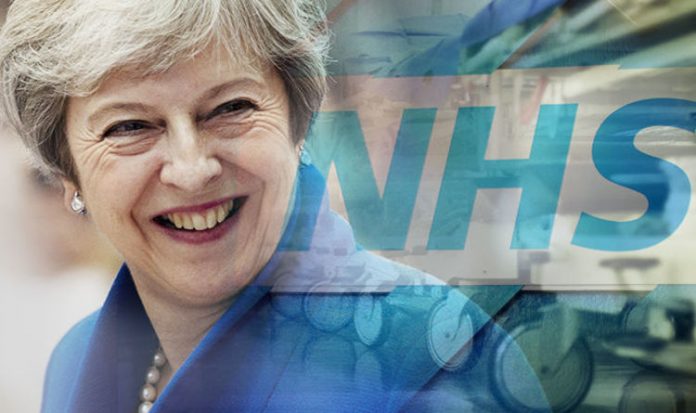 In her interview with the Daily Express, the Prime Minister warned that everyone will have to contribute to the £20billion increase in NHS funding her Government has pledged over the next five years.

But she promised to ensure the cash will be dedicated to improving patient care and not be squandered on bureaucracy.

“We have said we are putting a significant sum of money into the NHS – we believe that’s right.

“There will be a need to raise some money from people but we want to be able to make sure we do that in a fair and balanced way – that will be what lies behind any decision we make.

“The key thing is people want to know that any money that goes in is going to be spend effectively and the money isn’t going to be wasted,” she said.

She also repeated her promise that much of the multi-billion pound annual EU membership fee will be redirected towards health spending after Brexit.

“We’re not going to be sending vast sums of money to the EU ever year so we will be able to use money we would otherwise spending on the EU to spend on priorities like the NHS,” Mrs May said.

Mrs May said the overwhelming message from voters was for a hike in health spending while ensuring the money is not wasted.

“What I hear from people on the doorsteps is that they want more money in the NHS but they want to make sure it’s spent in the right way,” the Prime Minister told the Daily Express.

“We’ve asked the NHS to put their 10-year plan together, but alongside that we’ll be looking at monitoring that.

“That is the key message to the NHS – this is money we want to see spent on improving patient care.

“There are several things that can be done such as ensuring the best practice in the NHS is spread everywhere in the NHS. We need to ensure the money we spend is spent as effectively as possible in terms of patients.

“This is about patients – patients need to be at the forefront of our thinking when we’re looking at how this money should be spent. It’s about improving the care and treatment that people receive.”

Mrs May also promised the Government was working on a long-term plan to overhaul the social care system.

“In the long term, we need to find a sustainable settlement for social care. We’re producing a green paper that will look at how we can ensure that sustainability of social care into the future,” she said.

She also said the Government’s Industrial Strategy was included an initiative to help people live longer and lead independent lives into old age.

Mrs May also rejected criticism from some Tory MPs that her Government was lurching away from the low-tax, free-market policies of successful Conservative administrations in the past.

“The Conservative Party has always been the party that believes in sound management of the public finances – that’s one crucial difference between us and Jeremy Corbyn and the Labour Party.

“We’ve had to take some tough decisions; people have had to make some sacrifices over recent years because of the significant problems that Labour left us on the economy.

“If you look around the world it’s open economies that have brought about some of the greatest innovations in life quality.

“We remain passionate believers in free markets and open economies.

“We want markets to work properly – if they’re not, then it’s right to take action like with the energy price cap – but we also want to make sure we’ve got those opportunities to trade around the world.”