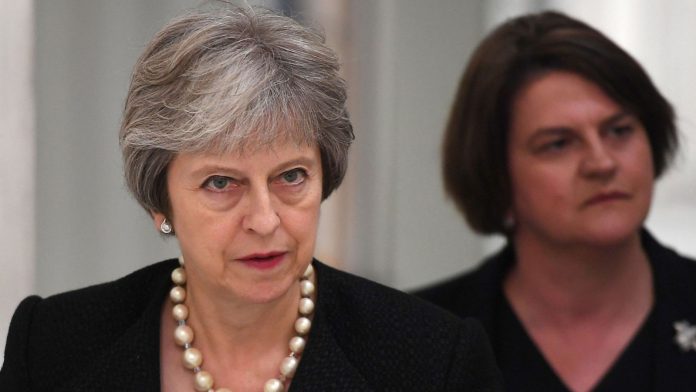 Theresa May will throw down the gauntlet to Brussels by demanding the EU “evolve their position” on Brexit, while declaring MPs will veto the bloc’s proposed Irish border solution.

Delivering a speech in Belfast, the prime minister will spell out how the EU’s plan for an Irish border backstop deal is in breach of the 1998 Good Friday Agreement.

Brussels has proposed, in the event no other solution is found to avoid a hard border on the island of Ireland, that Northern Ireland effectively remain in the EU’s single market and customs union.

The EU has made such a backstop agreement a key component of the UK’s withdrawal deal, but Mrs May has rejected the Brussels plan due to the likelihood it would erect a customs border in the Irish Sea.

With the prime minister opposed to anything that threatens the constitutional integrity of the UK, the impasse has become a major barrier to concluding a Brexit deal.

Britain’s own counter-offer on a backstop agreement, which includes a time-limit on any arrangement, was met with a cool reception by Brussels.

Speaking at Belfast’s Waterfront Hall on Friday, Mrs May will highlight how one of the amendments added by MPs to the government’s customs bill this week now makes it illegal for Northern Ireland to be part of a customs territory from the rest of the UK.

She will say: “The economic and constitutional dislocation of a formal ‘third country’ customs border within our own country is something I will never accept and I believe no British prime minister could ever accept.

“And as they made clear this week, it is not something the House of Commons will accept either.”

Mrs May has suffered a torrid fortnight since the publication of her Brexit strategy, as agreed by ministers at a Chequers away day, with Tory Brexiteers bitterly opposed to the plan.

However, the prime minister will use the speech to promote the Chequers plan, and a subsequent government white paper, as “the way to the stronger and brighter tomorrow”.

Having put forward her proposals for a future UK-EU relationship, Mrs May will say it is “now for the EU to respond”.

“Not simply to fall back onto previous positions which have already been proven unworkable,” she will add.

“But to evolve their position in kind. And, on that basis, I look forward to resuming constructive discussions.”

Stating her determination to “complete what we have started” in Brexit talks, Mrs May will say: “We can negotiate a new relationship with the EU that works in our mutual interest.

“One that honours the referendum result, gives us control of our money, our borders, and our laws.

“One that sets us on course for a prosperous future, protecting jobs and boosting prosperity.

“One that safeguards our Union and allows the whole UK to thrive in the years ahead.

“A brighter future for Northern Ireland – where we restore devolution and come together again as a community to serve the interests of the people.”

The prime minister will speak in Belfast after getting backing for her Brexit white paper from one of her cabinet Brexiteers, Leader of the House of Commons Andrea Leadsom.

However Ms Leadsom, who challenged Mrs May for the Tory leadership in 2016 before dropping out the race, appeared to warn the prime minister not to water down the Chequers plan during upcoming negotiations with the EU.

Demanding the white paper proposals are presented as a “final offer” to Brussels, Ms Leadsom told the EU if they reject the plan they will force a “no deal” Brexit.

She told The House magazine: “The EU has simply not taken us seriously so far in terms of the future agreement.

“What this deal does is it says to them, ‘right, now we can have a free trading area where there won’t be the need for border checks and controls’.

“The message to the EU has to be, ‘this is the final offer’.”

Ms Leadsom added: “It needs to be quite clear to the EU, ‘you’ve got to come to the table and start negotiating with serious focus and concentration and goodwill because otherwise, we will be leaving with no deal’.”