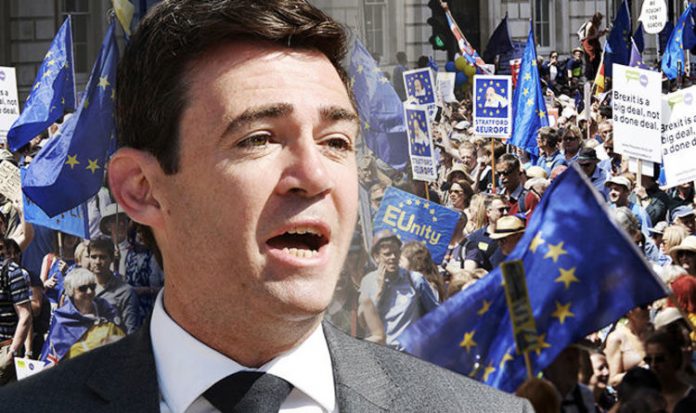 He spoke out after it emerged the People’s Vote pressure group is lobbying MPs and grassroots activists to support a motion at the Labour Party conference next week calling for a referendum on any final Brexit deal agreed between Theresa May and the EU.

Labour leader Jeremy Corbyn has claimed to oppose the idea of a second EU referendum but a series of Labour figures are urging him to shift his stance.

In an interview with the political news website Politico, the Manchester mayor signalled his irritation at the Brexit row engulfing his party.

“My frustration with those leaping to a second referendum is it further inflames this idea of an arrogant political class, which isn’t listening and isn’t dealing with the issues that gave rise to the referendum in the first place,” Mr Burnham said.

“I’ve still been of the view that what we need is the most pragmatic, practical, bridge-building Brexit.”

A draft resolution drawn up for the Labour conference in Liverpool says the public should have a “clear opportunity to participate in critical decisions”.

It notes: “Conference believes that if the Government’s proposed deal is unsatisfactory then the people should be allowed to express their view in a public vote on Brexit.

“The Labour movement can then unite behind Jeremy Corbyn’s determination to fight the Tories on a hard Brexit.”

The resolution sets the stage for a passionate debate among Labour activists in Liverpool about the second referendum proposal.

Former frontbencher Chuka Umunna is among Labour MPs at loggerheads with Mr Corbyn over the idea.

Shadow EU exit secretary Barry Gardiner has refused to completely rule out supporting a referendum while admitting the move could “exacerbate” divisions in the country between Leave and Remain voters.

“We have in my party said no option should be taken off the table,” he said in a BBC interview on Sunday evening.

“I think there are very good reasons why it is a dangerous thing to do. We’ve seen the referendum create huge divides — real, crunching divides — in our country.

“I think a second referendum will not heal those divides. I think it can only exacerbate them,” he added.

Tory MP Conor Burns insisted there was no need for a further vote on Britain’s links with the EU.

Some angry Labour activists have claimed the call for a second referendum is part of a push to undermine Mr Corbyn’s leadership.

But an internal memo from People’s Vote communications chief Tom Baldwin to the organisation’s staff insisted: “Whatever views people have about the overall direction of the Labour Party, this campaign is not about Jeremy Corbyn and we must not – will not – use it to damage or undermine the party’s leadership or attack them personally.”

Following the leak of the memo yesterday, Mr Baldwin said: “It’s vital that people recognise that this is such a huge issue for our country, for the next generation, for our vital public services, for our jobs, that it’s not something that should be used for any other objective.