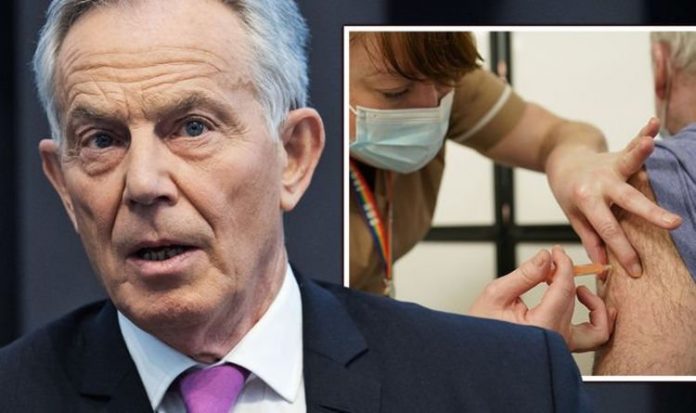 Speaking at an online event, former British Prime Minister Tony Blair rejected the idea that Britain’s vaccination success is a Brexit dividend. Referring to the UK’s fast vaccine rollout Mr Blair said: “We could have done this inside Europe. We didn’t need to leave Europe in order to have control of our own destiny and our vaccines.”

He said the key issue as to why the EU trailed behind Britain was because of the team tasked with vaccine procurement.

The former British leader said every UK Government “would have wanted to take charge of our own situation”.

He said that this was particularly due to the UK’s role in the development and manufacturing of the AstraZeneca vaccine.

The Oxford-AstraZeneca vaccine was one of the first in the world to reach the market.

In comparison EU countries have struggled to have access to enough inoculations.

However, the pace of vaccination has slowed down in the past few days.

Mr Blair has produced a report by his own think tank about how countries could prepare for the next pandemic.

Mr Blair revealed that he has had the AstraZeneca vaccine, then gave his support to the idea of vaccine passports.

He said that the rest of the world should assist African countries so they do not fall behind with vaccinations, which could lead these nations to be “effectively cut off so their liberties are going to be severely restricted”.

He added that it should not be rejected by older people, as has been seen in some European nations.

He said governments that encouraged this were making a “mistake”.