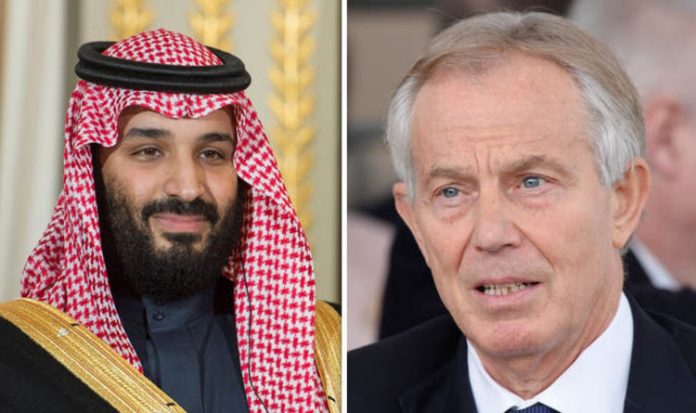 The Tony Blair Institute (TBI) reached a “not for profit” agreement with the Saudi government earlier this year, in order to “support the Saudi change programme”, the Sunday Telegraph has revealed.

The Former Prime Minister launched his institute in 2016 after receiving an initial £8million of funding, and has staff located around the world including in the United Arab Emirates which neighbours Saudi Arabia.

A spokesman for TBI acknowledged the institute had received a donation for their work in Saudi Arabia, and noted the funding would go towards the institute’s “declared mission in the Middle East”.

Defending the donation, the spokesman said: “To be clear, this is a donation to TBI, not a payment to Tony Blair personally and all of this money goes to support this work.

“TBI is a not for profit organisation from which Tony Blair takes no personal renumeration.

“The institute is committed to working for modernisation and reform in the region and working for a regional solution to the peace process.”

The spokesman added the work would be outlined in the institute’s first annual report, but noted the organisation was “under no duty to disclose donors or donations”.

The institute is believed to have received a donation of £7.6 million for their work in January, and has now received over £9 million, according to the Sunday Telegraph.

The donations were made by Media Investment Ltd (MIL), a subsidiary of the Saudi Research and Marketing Group registered in Guernsey.

Mr Blair has had close connections with the Middle East, after serving as Middle East envoy for the United Nations between 2007 and 2015 following his tenure as Prime Minister.

He also established Tony Blair Associates to provide “strategic advice on a commercial and pro bono basis, on political and economic trends and governmental reform”.

Since departing Downing Street, Mr Blair has worked with the governments of Kazakhstan, Mongolia and Kuwait, and took up a “senior advisory” role at JP Morgan Chase bank.

The former Prime Minister was also reported to have accepted a business advisory role with Abdel Fattah el-Sisi, the President of Egypt.

Mr Blair denied the report and has rejected accusations that his work with international governments presented a conflict of interest while acting as the UN Middle East envoy.

Commenting on the programme at the Future Investment Initiative conference in Riyadh in 2017, he said: “It is the most important and the most exciting thing that has happened in this region in the last few years.”