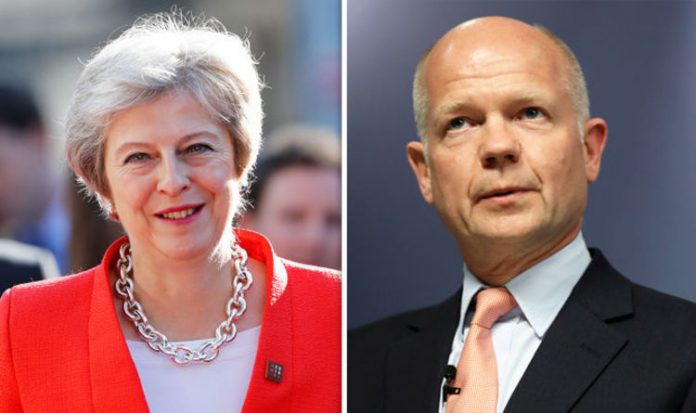 Mrs May’s allies were last week said to be plotting to hold a new election in a desperate bid to break the Brexit deadlock.

But former Tory leader Lord Hague said such a move would be “nonsensical” because the party is so divided over Brexit.

In a damning attack, the peer said any Downing Street aides actively considering the idea were either drunk or ill.

He warned a new poll could open the door for hard-left Labour leader Jeremy Corbyn to become Prime Minister.

He said: “If you find yourself talking, as some Tory aides were reported at the weekend as doing, of deliberately having another general election soon, you have probably had too much alcohol, or you might even need medical help.

“If the party were united on Brexit, it would be a brave idea. As things stand, it is a nonsensical one.

“You can’t have an election to resolve a problem within your own party and expect anything other than a disaster.”

Lord Hague also urged Tory MPs not to trigger a vote of no-confidence in Theresa May despite growing anger at her plans for Brexit.

He said: “It is clear that the next two months will be of vast importance in deciding many aspects of this country’s future.

“If the governing party spend this period on a leadership contest, that would be seen by most people as incredibly irresponsible and self-indulgent. And they would be right.”

The former Foreign Secretary went on to lash out at Labour’s “bullying, poisonous atmosphere” under Mr Corbyn’s leadership.

Writing in the Daily Telegraph: “There has never been, in the whole of British history, an opposition less fitted for office.”

Brexit Secretary Dominic Raab dismissed claims on Sunday that Mrs May was gearing up for another snap election.

Speaking on the BBC’s Andrew Marr Show, the Cabinet minister said: “It’s for the birds. It’s not going to happen.”

A Downing Street spokesman added: “It is categorically untrue that No 10 is planning a snap election.”

Labour’s Shadow Chancellor John Donnell yesterday urged Mrs May to call a general election, saying his party was “ready” for a fresh poll.

He said: “Whenever the general election comes, we are ready. Ready to campaign for victory, ready for government, ready to build the future.”