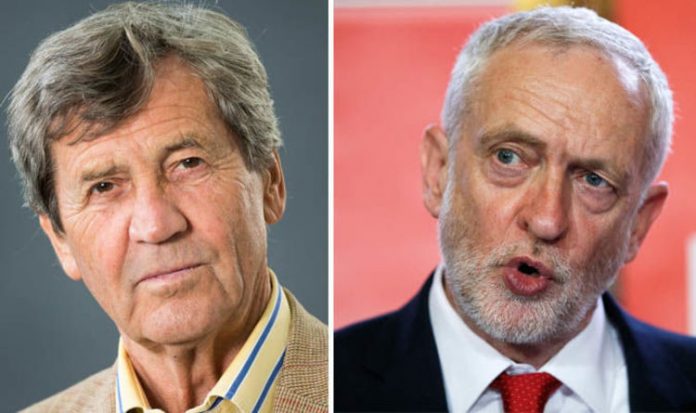 The veteran broadcaster’s comments came as the UK’s three leading Jewish newspapers took the unprecedented step of publishing a joint front page message warning that a Corbyn-led government would pose an “existential threat to Jewish life in this country”.

Under the headline “United We Stand”, the Jewish Chronicle, Jewish Telegraph and Jewish News described Labour’s refusal to adopt in full the International Holocaust Remembrance Alliance’s (IHRA) definition of anti-Semitism as “sinister”.

They urged Labour MPs to back a motion to be debated by the parliamentary party in September to accept the IHRA definition in full, including its list of examples of anti-Semitic behaviour.

Labour insisted Mr Corbyn and the party are “fully committed to the support, defence and celebration of the Jewish community and its organisations”.

Labour’s ruling National Executive Committee enraged many Jews by omitting four of the examples, mostly relating to criticism of the state of Israel, from its new code of conduct on anti-Semitism. The party says the same issues are covered elsewhere in the document.

In a letter to The Times, Lord Bragg said he does not believe Mr Corbyn is a racist, but said he has failed to tackle anti-Semitism in the party effectively.

“The virus of anti-Semitism is growing in the UK and Corbyn is in a strong position to stamp it out without any equivocation,” said the former South Bank Show presenter.

“Jeremy Corbyn’s feebleness on this matter is a disgrace to the Labour Party and shames its traditional creed of tolerance, as well as grossly insulting some of our fellow citizens.”

The joint editorial in Jewish newspapers warned “the party that was, until recently, the natural home for our community has seen its values and integrity eroded by Corbynite contempt for Jews and Israel”.

The papers said Labour had “diluted” the internationally-recognised IHRA definition with the effect that “political anti-Semitism targeting Israel” is regarded as acceptable unless racist intent can be proved.

They alleged the changes were made in order to avoid the need to expel hundreds or even thousands of party members.

“With the Government in Brexit disarray, there is a clear and present danger that a man with a default blindness to the Jewish community’s fears, a man who has a problem seeing that hateful rhetoric aimed at Israel can easily step into anti-Semitism, could be our next prime minister,” stated the editorial.

A Labour Party spokesman said: “Jeremy Corbyn and the Labour Party are fully committed to the support, defence and celebration of the Jewish community and its organisations.

“The next Labour government poses no threat of any kind whatsoever to Jewish people.

“The security and wellbeing of Jewish people is a priority for our party and in government we will always ensure schools, synagogues and institutions are properly protected.

“We understand the strong concerns raised in the Jewish community and are seeking to engage with communal organisations to build trust and confidence in our party. We know there is a huge amount of work to do.”

“Labour’s code of conduct on anti-Semitism adopts the IHRA definition and expands on and contextualises its examples to produce robust, legally-sound guidelines that a political party can apply to disciplinary cases,” he said.

“We have concerns about one half of one of the IHRA’s 11 examples, which could be used to deny Palestinians, including Palestinian citizens of Israel and their supporters, their rights and freedoms to describe the discrimination and injustices they face in the language they deem appropriate.”