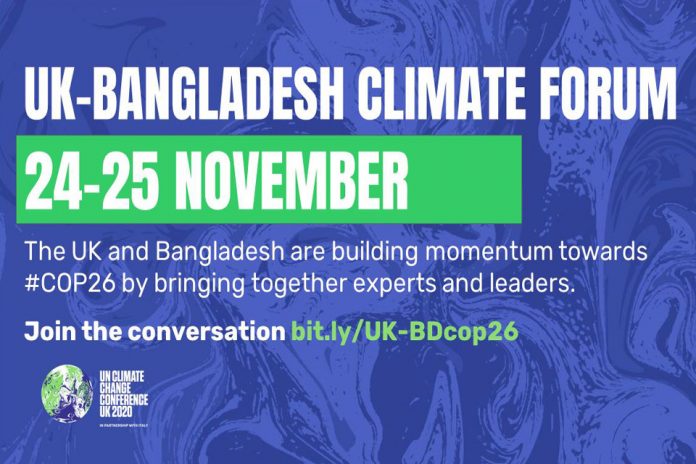 On 24 and 25 November, the UK and Bangladesh launched the first of a virtual series of events designed to build on the countries’ growing collaboration in advancing the climate agenda on the journey towards next year’s UN climate change conference (COP26).

The UK-Bangladesh Climate Partnership Forum virtual series brings together experts and leaders from Bangladesh and the UK to identify innovative ideas, partnerships and initiatives to catalyse climate action. These first two events focus on adaptation and resilience with future events structured around the COP26 themes of nature, clean energy and finance.

Bangladesh Director of Development at the Foreign, Commonwealth and Development Office, Judith Herbertson opened the series on 24 November.

She said: One of the UK’s top objectives for COP26, and for this forum, is to hear voices from frontline, from the young, from the experts, from the private sector, from our friends and from people we haven’t heard from yet. We want to hear all your ideas.

The virtual series is led by Professor Saleemul Huq, Director, International Centre for Climate Change and Development (ICCAD) and Simon Maxwell, Senior Research Associate, Overseas Development Institute (ODI). It is managed by Mott MacDonald in partnership with ODI on behalf of the UK Foreign, Commonwealth and Development Office and the British High Commission Dhaka.

Speaking about the partnership between the UK and Bangladesh, Lord Ahmad said

“This UK-Bangladesh partnership on climate action is built on the strong links between our two countries and will last long beyond COP26…The UK as COP26 President Designate, and Bangladesh as chair of the Climate Vulnerable Forum, are uniquely placed to play leading roles in this critical year ahead for our planet.”

Speaking on the topic of adaptation and resilience, Anne-Marie Trevelyan said

“Bangladesh has not stopped being a highly climate vulnerable country, but it is also now a leader on adaptation and resilience. There is much that the UK, and other countries, can learn from Bangladesh’s experience.”

Khurshid Alam, Assistant Resident Representative, UNDP and Baroness Brown of Cambridge, Chair of the Committee on Climate Change’s Adaptation Committee and Chair of the Carbon Trust delivered the keynote speeches on climate adaptation from the perspective of Bangladesh and the UK.

Mr Alam and Baroness Brown were joined by Abul Kalam Azad, special envoy to the Climate Vulnerable Forum’s (CVF) Presidency; Dr Rebecca Nadin, Director of Programmes for Risk and Resilience, ODI; Dr Atiq Rahman, Executive Director, Bangladesh Centre for Advanced Studies; and Anu Jogesh, Policy and Governance Lead for Acclimatise South Asia, Acclimatise. The panellists reflected on the importance of seeing adaptation as a global issue requiring a systems-resilience approach that takes into account the transboundary nature of climate risks and acknowledged that the climate community needed to get better at communicating with policy makers, the media and the general public on issues around adaptation.

The next events in the series will focus on nature-based solutions and will take place on 8 and 9 December. Find out more and register at the series event page http://cop26-uk-bangladesh-forum.eventbrite.com

The UK will host the 26th UN Climate Change Conference of the Parties (COP26) in Glasgow in November 2021.
The climate talks will be the biggest international summit the UK has ever hosted; bringing together over 30,000 delegates including heads of state, climate experts and campaigners to agree coordinated action to tackle climate change. In its role as president of the Climate Vulnerable Forum, Bangladesh will be representing more 1.2 billion people living in 48 of the world’s most climate vulnerable countries at COP26.