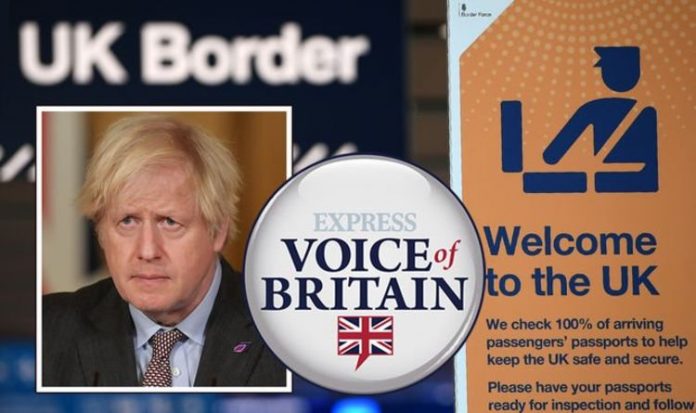 Home Secretary Priti Patel reportedly favours a temporary closure of all of the country’s borders in a bid to stop potentially vaccine-resistant strains of Covid making their way onto UK shores. But the Prime Minister is so far resisting calls to make such a move and prefers a hotel quarantine approach instead. Earlier today, the UK Government announced travellers arriving in the country from high-risk coronavirus countries will have to quarantine for 10 days in Government-provided accommodation.

Ms Patel told the House of Commons those wishing to leave will be required to explain why in a process checked before departure.

She said further details on the “managed isolation process”, where people quarantine in hotels, will be provided next week, adding police will also be on hand to check on arrivals from elsewhere.

But in the latest Express.co.uk poll, readers have overwhelmingly urged Mr Johnson to completely close all of the UK’s borders.

The poll, which ran from 9am until 5pm on Wednesday January 27, asked: “Should Boris Johnson close UK borders to stop the spread of coronavirus?”

The Prime Minister has been warned the UK’s borders should have already been closed (Image: GETTY)

A huge 93 percent of voters (3,454 readers) urged the Prime Minister to make the move. The remaining seven percent (229 readers) disagreed, while less than one percent (16 readers) were undecided.

But although Express.co.uk readers have urged Mr Johnson to close all of Britain’s borders to help curb the spread of coronavirus, they have questioned why this move wasn’t quickly implemented when the seriousness of the pandemic became evident.

One person wrote: “The UK should have stopped entry early on – last March, like other countries did.

“Sadly, it is too late now. The horse has bolted.”

Boris Johnson has been urged by Express.co.uk to close the UK’s borders (Image: EX-PRESS)

A second reader commented: “Should have been done last March.

“Ridiculous picking a few countries people will just fly to those accepted countries and get in via that way.

“Closing the borders should have been the first thing he done.”

Another person said: “This should have been one of the first things they did, not something done as an afterthought over a year later.”

A fourth reader added: “Yes about time Boris. Shut down the borders.

“Should have been done at the time of the Covid rise, as you have left it too late.”

Announcing the new measures in the House of Commons earlier today, Home Secretary Ms Patel said: “Firstly, the police have stepped up checks and are carrying out more physical checks at addresses to ensure that people are complying with the self-isolation rules.

“Second, we will continue to refuse entry to non-UK residents from red-list countries which are already subject to the UK travel ban.

“Third, as the Prime Minister has said, we will introduce a new managed isolation process in hotels for those who cannot be refused entry, including those arriving home from countries where we have already imposed international travel bans.

“They will be required to isolate for 10 days without exception and the Department for Health and Social Care will set out further details on this approach next week.”

Millions of people have received a Covid vaccine in the UK (Image: EXPRESS)

She added: “It is clear that there are still too many people coming in and out of our country each day.

Earlier, during Prime Minister’s Questions in the Commons, Mr Johnson warned the country must take “additional steps to strengthen our borders” to stop new strains of coronavirus from entering the country.

He also warned that under the current stay-at-home guidance from the Government, it is “illegal to leave home to travel abroad for leisure purposes”.

The Prime Minister told MPs: “We have already temporarily closed all travel corridors and we are already requiring anyone coming to this country to have proof of a negative Covid test taken in the 72 hours before leaving.

“They must also complete a Passenger Locator Form which must be checked before they board – and then quarantine on arrival for 10 days.

“I want to make clear that under the stay-at-home regulations it is illegal to leave home to travel abroad for leisure purposes and we will enforce this at ports and airports by asking people why they are leaving and instructing them to return home if they do not have a valid reason to travel.

“We have also banned all travel from 22 countries where there is a risk of known variants, including South Africa, Portugal and South American nations, and in order to reduce the risk posed by UK nationals and residents returning home from these countries, I can announce that we will require all such arrivals who cannot be refused entry to isolate in Government-provided accommodation – such as hotels – for 10 days without exception.”