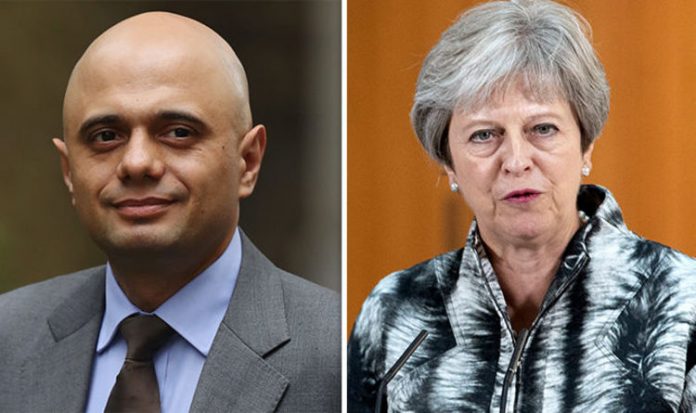 The Daily Telegraph has learned Sajid Javid criticised Theresa May in a letter to Number 10 after she rejected an official recommendation for a three percent pay rise for officers of all ranks.

Mr Javid said he was “strongly in favour” of the suggested pay increase.

He also warned the Conservative leader the failure to implement the plan would give Britain’s serving police officers “only a small one percent pay rise in reality”.

The letter, sent by senior Home Office officials at the end of June, said: “As you will be aware, the Police Remuneration Review Body recommended the consolidation of the one percent non-consolidated award for police officers from 2017/18 and, following that consolidation, a two per cent consolidated increase for officers at all ranks from 1 September 2018.

“The Home Secretary was strongly in favour of this.

“However, the Prime Minister and Chancellor have decided that officers should only be given a two percent consolidated pay award, meaning only a small one per cent pay rise in reality.

“He continues to be of the view that this is the wrong decision.”

This issue first arose last month when Mrs May rejected calls by the independent Police Remuneration Review Body to give police a pay rise of three percent, including a one-off bonus of one percent.

On Tuesday, the Prime Minister was quick to praise Metropolitan Police officers and emergency services personnel for their response to the suspected terror incident in Westminster.

However, she was blasted by the Police Federation for her praise when budgets are being cut.

Writing on Twitter, Mrs May said: “My thoughts are with those injured in the incident in Westminster and my thanks to the emergency services for their immediate and courageous response.”

The Police Federation boss John Apter said yesterday: “What angers me is that in times of crisis, such as what happened on Tuesday on the doorstep almost of Parliament, then the Prime Minister is the first to celebrate how brilliant police officers and policing are.

“But in the very next breath she’s stabbing them in the back.

“The hypocrisy that comes from the Prime Minister really does stink; she can’t have her cake and eat it when it comes to a relationship with policing and police officers.”

The Federation represents 119,000 officers and has long campaigned against budget cuts on the grounds of public safety.

Sajid Javid and Theresa May have clashed on several matters since he was appointed to the post in April this year.

They have disagreed on issues including her migration policy, as well as other policing matters, including the Home Secretary’s call for more front line officers.

Mr Javid has been touted by many in the Tory party as a potential future leader.