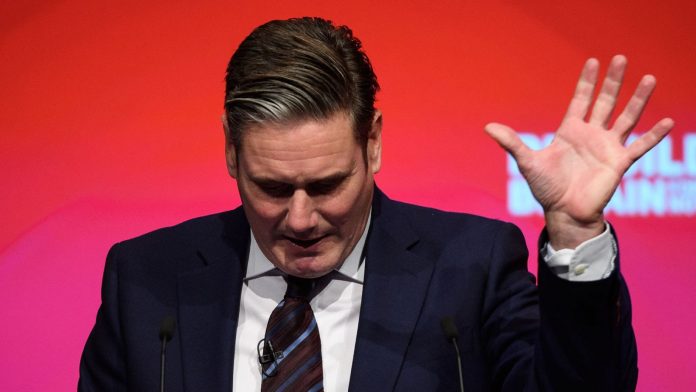 Sir Keir Starmer, Labour’s shadow Brexit secretary, uttered these words, only 24 hours after the shadow chancellor, John McDonnell, well, er… ruled out Remain as an option in any second referendum on Britain’s membership of the European Union.

Although Mr McDonnell rowed back over the course of Monday, this is a pretty startling rebuke to the second most senior figure in the Labour leadership.

Even more so when you consider that the line was not in the text of the speech which had been pre-briefed to journalists – Starmer was ad libbing.

What was behind it?

To some extent it is part of the “constructive ambiguity” Labour has deployed since the referendum.

At different times, different Labour politicians have pointed in different directions on the Brexit issue.

This ambiguity served them well at the general election where, despite a heavy bleeding of working class Leave voters to the Tories, the party kept enough of them to keep nearly all of their Brexit voting seats (though some, such as Mansfield and Stoke South, did turn).

Labour was also the recipient of a Remainer wave which delivered seats like Kensington, Canterbury and Warwick.

That wave has forced the party in an increasingly Remainer direction. The tale of the last year is one of incremental nudges towards a softer and softer Brexit.

The party itself has also been agitating heavily for a second vote. Over a hundred constituency Labour parties have endorsed the idea. Key trade unions have come onside, too.

But it also reflects the difference of view between different bits of Labour’s top team.

The man who has been doing most of that nudging is Sir Keir himself.

:: Labour to vote against PM’s Brexit deal
:: Corbyn would be ‘incompetent’ Brexit negotiator

He has sometimes encountered resistance from the more Eurosceptic Jeremy Corbyn and Mr McDonnell and other MPs.

This is Sir Keir laying claim to his turf, and judging from the rapturous response in the hall will have done himself no harm whatsoever with the Labour Party membership.

The odds of him becoming the next Labour leader (though not especially high given his not being on the party’s left) must have just become a little shorter.

Ultimately, though, beyond the theatrics, not much has changed.

The motion Sir Keir was describing, signed off by the leadership, effectively gives the party as much freedom of action as it wants – to back a second referendum with almost any option included.

Both sides of the divide – and every bit of the Labour Party – much prefer a general election to diffuse any inconclusive Brexit parliamentary impasse.

That is what they will be agitating for.

This debate, is mostly, for every side, discordant mood music.