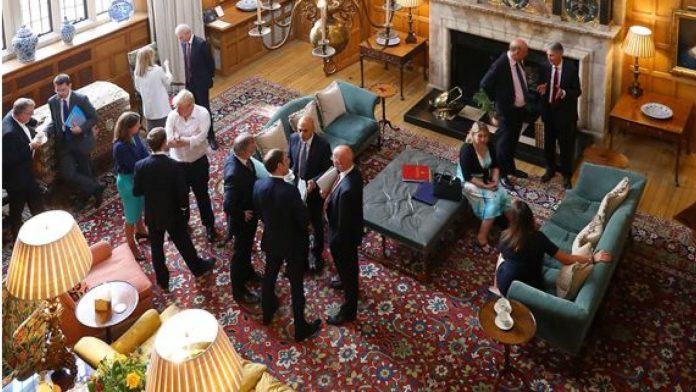 On Friday, Theresa May got her cabinet to line up behind her proposals for a future relationship with the European Union.

After lengthy talks, she persuaded both hard line Brexiteers and pro-Remain ministers to back her plans to create a new UK-EU free trade area for goods.

But, two days is a long time in politics. Brexit Secretary David Davis is gone, with Dominic Raab replacing him.

Mr Davis said the UK government was preparing to give “too much away too easily” – something he described as a “dangerous strategy”.

Dominic Raab, the new minister in charge of negotiating the UK’s relationship with the EU, is yet to comment – but friends have said he will be very capable in the role.

Here, we look at who was at the Chequers awayday on Friday and whether their position has changed since then.

1. Jeremy Hunt, health secretary: The former Remainer, who has said he would vote for Brexit if there was another vote, said the country faces an “extremely delicate and difficult” situation following Mr Davis’s departure.

2. David Davis, now former Brexit secretary: He resigned from his role on Sunday night, saying the prime minister’s proposals meant it looks “less and less likely” the Conservative Party will deliver on Brexit.

3. Robbie Gibb, Number 10 director of communications: The Brexiteer was seen accompanying Brexit minister Suella Braverman between 10 and 9 Downing Street, after it was rumoured she had resigned along with Mr Davis. Soon after, the government said she was still in her post.

4. Michael Gove, environment secretary: The key Brexiteer appeared on TV channels on Sunday morning backing Mrs May’s proposals, but admitted the plan was not everything he had hoped for. Nonetheless, he said was a “realist” and the prime minister’s lack of a Commons majority meant the “parliamentary arithmetic” was a factor in deciding what could be adopted.

5. Liam Fox, international trade secretary: One of “the three Brexiteers” – alongside Mr Johnson and Mr Davis – Dr Fox is yet to publicly comment on the proposals. He was among those rumoured to have got the Brexit secretary job, before it was announced he had not.

7. Gavin Williamson, defence secretary: Although a Remainer, his occasionally tough talk has led to his name being touted as a future leadership candidate – with rumours circling this could become a possibility if the Brexit chaos leads to Mrs May’s downfall.

8. Boris Johnson, now former foreign secretary: He reportedly described the proposals as “polishing a turd” – repeatedly using the phrase at the Chequers awayday. His exit was announced by Downing Street.

9. Sajid Javid, home secretary: The Remainer was briefly touted as someone who may replace Mr Davis, but he has his hands full dealing with the Amesbury novichok murder investigation. He has not commented on Brexit, other than to retweet Downing Street’s own post on the Chequers proposals. He is said to have had concerns about EU migrants being given special treatment.

10. Karen Bradley, Northern Ireland secretary: The Remainer, who is minister for a country that voted 56% to stay in the EU, has not publicly commented. Northern Ireland has much to lose in the event of a “no deal” Brexit, as it could lead to a hard border with Ireland.

11. Philip Hammond, chancellor: The Remainer wrote a joint column for The Sunday Telegraph calling the Chequers proposals “a pragmatic as well as a principled Brexit deal, one that works for both the EU and the UK”.

14. Esther McVey, work and pensions secretary: Another Brexiteer who has not publicly commented.

15. Chris Grayling, transport secretary: The Brexiteer was also strongly rumoured to be in the running to replace Mr Davis on Monday, and he co-wrote the Telegraph op-ed with Mr Hammond.