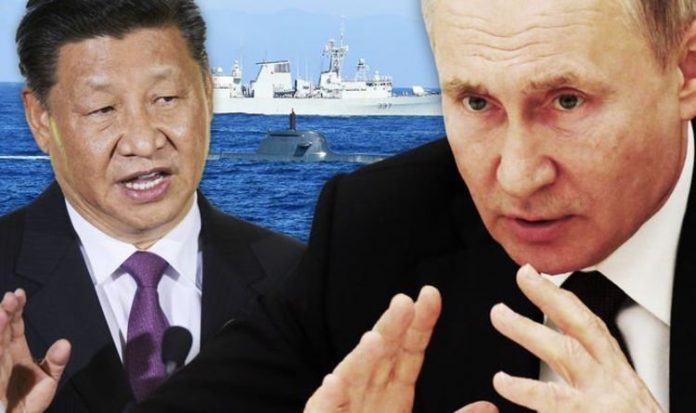 Prime Minister Boris Johnson has ordered a controversial integrated defence review – headed up by his chief advisor Dominic Cummings, but it has been criticised as a “cost-cutting” exercise. Britain’s armed forces will be reshaped to be “fit for tomorrow’s battles, not fighting yesterday’s” under a major review of defence policy and spending, Defence Secretary Ben Wallace has said. Due to conclude by the end of the year, the review pledges to be the widest-ranging since the Cold War, with a particular focus on cybersecurity over ground forces.

But some have warned it could leave parts of the Armed Forces, including the Royal Navy, “spread too thin,” and Nicholas Drummond, who is currently advising the Defence Select Committee on the proposal, agrees.

He told Express.co.uk there are five threats that the UK currently faces – listing Russia, China, North Korea, Iran and an unexpected conflict that arises on Britain’s doorstep as the pressure points.

Mr Drummond says investment is needed into the Royal Navy – not cutbacks.

He added: “We have to prioritise support ships to the Royal Navy, if we cannot support it when it’s deployed, then it is useless.

“The issue with the Navy is it wants to do carrier strike formations more than anything else, but the cost is so great it prevents them performing other more basic roles.

“You need to have attack submarines – to protect nuclear missile submarines, but also to deter the other submarines.”

It has previously been reported that anti-submarine warships could be cut down to single figures following the review, in an act that has been deemed a “national embarrassment” for a maritime nation.

But Mr Drummond says submarines are just as vital to defending the UK.

He added: “China is massively expanding its submarine fleet, and so is Russia.

But it has been claimed that these orders may be cut under the review.

Mr Drummond says more attention must be given to these support ships.

He continued: “If they are protecting the carriers, then they cannot do their primary role.

“Carrier strike is great, and what we are building is so impressive, but it’s just eye-wateringly expensive.

“I’m a great supporter of it, but if we are going to have it we need more money.

“If you have three submarines deployed in South East Asia and two with the carriers, that leaves you with three, three submarines to protect all the approaches to the UK – that is not very many.”